On October 13, staff from the Umeå, Sweden fire department were able to save the life of a person who had suffered from a cardiac arrest, using a recently-purchased automatic external defibrillator.

The department had purchased five HeartSine® samaritan® PAD defibrillators from ViaMedici in June of this year to properly equip its emergency vehicles. Last week, they got a chance to put one to good use when an elderly man collapsed in central Umeå. 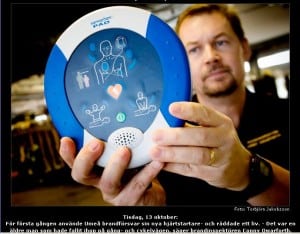 “We felt our fire brigade could get to the scene faster than an ambulance,” said Umeå Fire Department spokesman Conny Owaforth. “So we responded immediately and reached the man within two minutes.”

“When we arrived, there were people already carrying out CPR, something they deserve great thanks for. They helped to save this man’s life.”

Once in place, Owaforth used the HeartSine samaritan PAD. In describing his actions, he says, “The device told me to press the shock button after analysing the man’s heart. When I did, the man woke up at once. It was very nice that it worked on my first attempt, and we were really happy that we managed to save this person. When the ambulance arrived at the scene about three minutes after us, the man wasawake and talking.”

About HeartSine Technologies
A world leader in personal and public access cardiac rhythm management, HeartSine’s mission is to advance the deployment of lifesaving defibrillation therapy in non-traditional areas of care through the development of proprietary technologies and quality products. Its HeartSine samaritan PAD is a sophisticated, lightweight automatic external defibrillator designed for rescuers of all skill levels and is ideal for sports facilities, schools, churches and business.